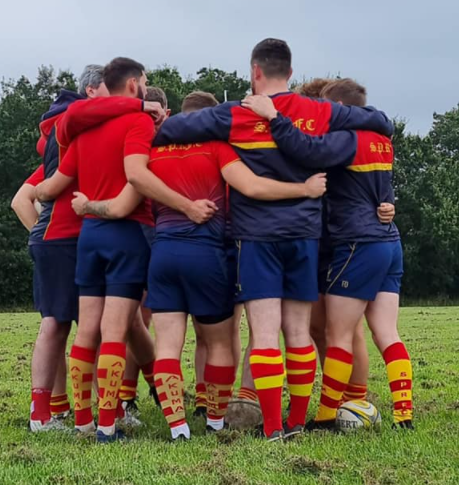 Nearly 18 months after all rugby as we know it came to a halt as a result of the coronavirus, grassroots rugby in general and Stockwood Park RFC in particular burst back into life last Saturday. It was an occasion to be enjoyed by players, coaching staff  and supporters as Park visited Hendon RFC for a pre league season friendly.  Although Park lost the match by 17 – 14 when Hendon kicked a last minute penalty to secure their victory, both teams will take plenty of positives from their performances.

For Park there were a number of impressive debuts from newcomers with a man of the match  performance from their 19 year old tight head prop ,former Colt Mark Smith,  who was solid in the scrum and contributed strongly in general play. Park’s forwards generally had the edge over their opponents and were well led from the front by their skipper, Hooker Tom Childs. In the backs Hendon’s strong running wings caused some problems but both sides defended well in what was an entertaining game.

Park started the game strongly and were soon on the scoreboard with a try following a strong forward drive for number 8 Sonny Monaghan to make the touchdown.  Debutant Fly Half Jamie Prosser added the extras.  Park had the edge for much of the first half but were unable to add to their score before Hendon replied with a converted try of their own just before halftime.

Park started the second half as they had done the first with an excellent team try involving forwards and backs before Full Back Dan Needham touched down. James Mckenzie added the extras.  Park continued to hold a 14-7 lead but with the game approaching the finish they conceded a converted try for Hendon to level the scores before Hendon added a penalty to win the game.

This was an encouraging start for Park with their 2nd XV winning the first match of their league programme with a 31 – 20 victory away at Old Northamptonians RFC.

Next week both the 1st XV  and 2nd XV travel to Welwyn for  friendly fixtures.